Sounding as casual as possible.... so I saw my good friend, Lance, the other day. You know... Lance Armstrong. Yaa him. We go way back. Anyone believe that? Ok, just look at the picture: 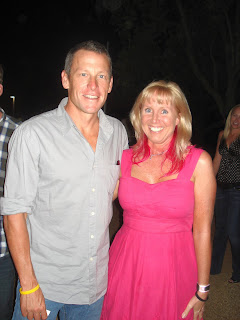 You'll know that Lance Armstrong and I are not good buddies because as you can see, I look like I'm about to jump out of my skin in excitement. Look at my hand.... see the stress there? That's when Lance put his arm around the back of my waist and I forgot how to breathe at that point!
So Mellissa and I set out on our exciting journey to the LiveStrong Challenge this past weekend. With freshly dyed pink hair and a new pink ponytail attached to each of our helmets, we were ready. 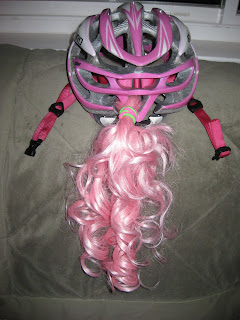 My wonderful friend that I consider to be my sister, Noha, sent me this beautiful Cancer ribbon to wear in memory of my dad at the LiveStrong Challenge. For those that don't know, my dad lost his battle with Esophageal Cancer 3 years ago. My daughter and I have participated in the LiveStrong Challenge since it started 4 years ago and our little Eddie's Angels Team has raised about $15,000 in the fight against Cancer. 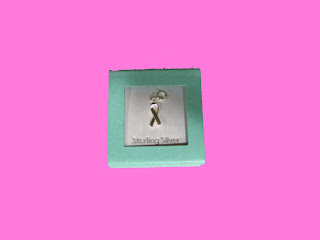 My friend, Russ, earned tickets to the top fundraising dinner the night before the LiveStrong Challenge. He wasn't able to use the tickets because he had a music gig with his band, SAGE that evening so with his huge heart, he offered his tickets to Eddie's Angels. We were top fundraisers in 2008, but didn't raise enough for the special dinner with Lance Armstrong this year so we were hugely excited when Russ offered us his tickets! Here is some of our Eddie's Angels Team: Cristin, Mellissa, & Stephanie. 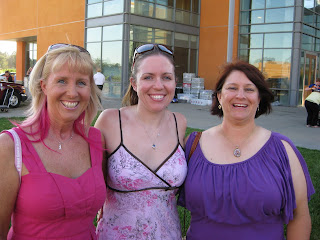 Mellissa with her dad,  Rich at the fundraising dinner. 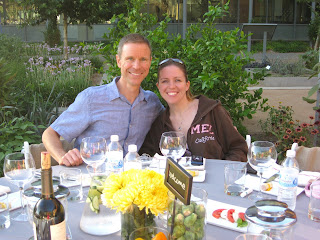 And look who arrived on scene!!!!! 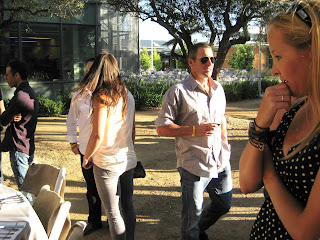 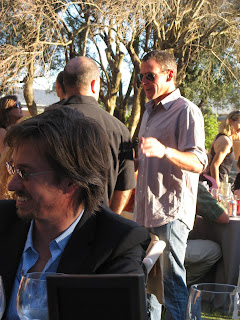 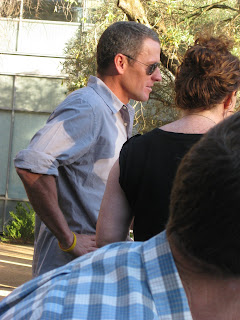 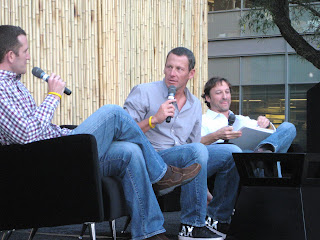 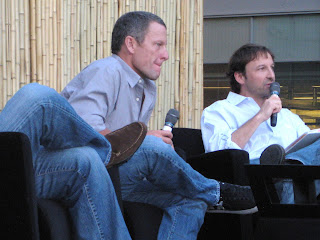 So Lance Armstrong is super cool. Yes, he's won the Tour de France 7 times and lots of other huge accomplishments. The most amazing thing to me though is that this man had less than 10% chance of survival from Cancer and he's here. This man has been such a role model and such an incredible inspiration to those battling Cancer. This is the way I look at it. The devastation that I feel from watching my father die could easily keep me from getting out of bed every day. I miss my dad, my mentor, my biggest fan, my friend. Instead I made the choice to get up and ride 106+ miles and raise money in the battle against Cancer so that one day, a gal won't lose her dad to Cancer. Lance Armstrong made it possible for me to do that. He makes it possible for all those that participated in the LiveStrong Challenge to be a part of something bigger than ourselves. Each person that donated to Eddie's Angels has become one of my dad's angels. We are all raising awareness and being a part of the fight against Cancer. Thank you Lance Armstrong!