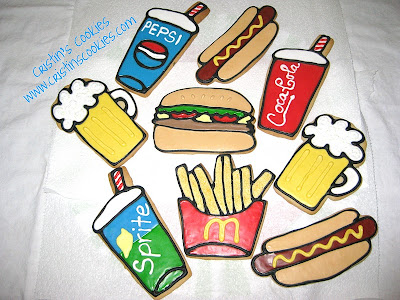 I gave out cookies on the ride today. Fast food cookies. I'm a very strict vegetarian and have been for at least 35 years. I also don't like greasy food. I have a sweet tooth instead. That's really my only vice. The guys on the rides however, always talk about fast food, so I thought it would be fun to make fast food cookies. 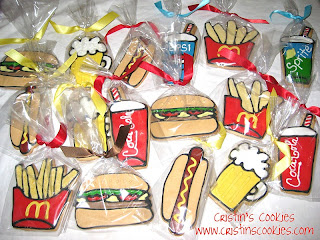 They put the cookies in their back pockets and we rolled. Rolling is a term both my baking friends and my cycling friends use, but with different meanings ;-)


The ride today was almost 49 miles long. The wind wasn't freezing cold like Monday's ride and the pace was much more manageable. We climbed up Bailey and when I got to the top, I went back down to ride with some riders still on the hill. We then climbed Buffalo and again, at the top, I went back down to ride with the others. There were two gals that hadn't ridden in a long time, so I chatted with them while they climbed to the top. Four people in the group decided to shorten the route. I decided to stick with the original route and try to keep up with the fast guys. This left me as the only girl on the ride. Ugh. I hate that. At 11:19, I told the guys that I was not going to stop at the rest stop so that I could get a head start and they wouldn't have to wait for me at the top of the next hill. They said ok. At 11:20 I could see them coming through the mirror on my helmet. What the heck? Thanks for less than a minute of a head start! At 11:25, they passed me.


Lesson learned: the guys just see me as a pink rabbit for the hounds to chase after!
At the lunch stop, we waited about an hour, but the four cyclists that had shortened the route, never joined us. We called and texted, but no response. It turned out that two of them crashed. They were in a tight paceline and one of them hit into the tire of the bike in front of her. In almost every scenario, this makes the cyclist in the back crash, not the one that was hit into. So she went down. Then the cyclist behind the one that crashed, couldn't stop in time so she crashed too. They both have slight injuries and road rash, but are going to be ok.


It's supposed to rain here tomorrow and possibly snow(!) Friday and Saturday, so I will likely be home working in my office and getting some baking time in. Have a great day all!