Courage - When the world says, "Give up", Hope whispers, "Try one more time"

A "cookier" friend of mine did an amazing post on her blog the other day Glorious Treats and I haven't been able to get my mind off it. She pointed out that we generally show pictures of our best cookies and hide the ones with mistakes and don't show that our kitchen looks like a bomb went off after spending a lot of time decorating cookies. She went on to say that women in particular have negative voices in our heads about ourselves and compare ourselves to others. Everything she said was dead-on.

I find inspiration from friends. Their cookie projects, their bike rides, their accomplishments, their lessons learned. I don't have the jealousy gene. I never have. I think we are here on earth specifically to learn and better ourselves and we are MEANT to make mistakes. I admire others to a fault. Yes, to a fault. For instance, at a karate tournament one time, I was kicked in the neck by a gal about 20 years younger than me. Guess what I said... "wow, amazing kick, great job!" Then I spent the next 3 weeks going to a chiropractor 3 times a week trying to walk upright. Yes, I admire others and their accomplishments to a fault ;-)

So although I don't have the jealousy gene, I have the other parts like the negative self-image in my head. Not good enough, not strong enough, not thin enough, not fast enough, not pretty enough... we could go on for days here. We are our own worst critics aren't we! The funny thing is that I REALLY believe other women don't have this issue nearly as bad as I do. For one thing I ride with guys. They don't have pear shaped bodies. They glide easily up the hills while I huff and puff ready to blow out a lung climbing a mountain. They are built differently and no matter how hard I might try, it's just not the same. Let me give you a for instance into my twisted little mind... I got horribly sick before my bike ride this morning. My stomach was in knots with the "I can't do it, I won't be able to keep up, it's going to be too hard for me, I'm not strong enough..." The ridiculous thing is this was just a normal weekend bike ride with FRIENDS. This was not a competing event - you won't catch me in one of those. I do this to myself on a normal long bike ride all the time. Pathetic right? The bike ride was great by the way! Oh except for the one part where I was riding 15.7 mph and the guy in front of me came back and said "are you okaaay?" Of course I heard that as "what's wrong with you, why are you so slow"? argh. 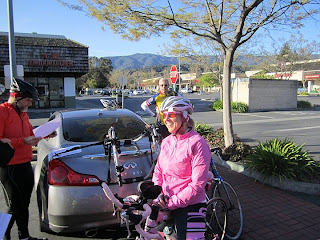 It gets worse... I threw up multiple times before my advanced WHITE belt test in karate. Yep, WHITE belt test. Then again made myself hugely sick for my yellow belt test. The Senseis figured out that I was turning myself into knots over these tests, so they didn't tell me when I was testing for my advanced yellow belt test. Instead I showed up at the dojo and saw the numerous cars and about had a panic attack in my car! I did a little bit better with less time to get stuck in my head with negative thoughts of self-doubt, but my stomach was in knots. This went on through the years with green and brown belt testing. The only time I did not make myself sick and flip out was my Black Belt test. More on that in a bit. 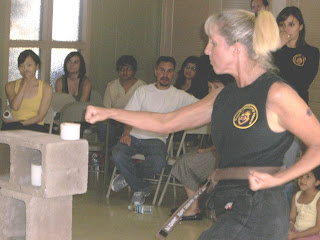 I'm proud of most of my decorated cookies, but I can't even tell you how many that my son and his friends have eaten because they were not good enough in my overly self-critical mind.  It's pretty frustrating when you spend days making beautiful cookies and then you mess up on a line in the decoration and they don't look pretty anymore. It happens. I'm grateful to still have a teenager in the house to "take care of" my mistake cookies. I think he's pretty grateful too ;-) I would love to input some pictures of my failed attempts, but I made sure to have Nick eat them quickly before anyone could see them ;-)

I'd love to say I've found a way for us to have nicer voices to ourselves, but I haven't figured that out. I hope to one day. What I have figured out is that every day that I push myself to do something that I didn't think I could do, God uses it as an opportunity to help me grow and become a better me. Just like my email signature says "Courage - When the world says, "Give up", Hope whispers, "Try one more time". I also take comfort in knowing that my father was proud of me every single day, pink hair and all. I don't think I can ever do much better than that.

My Black Belt test was the only time that I can think of that I did NOT get in my head. I don't recall worrying about what other people thought of me throughout the 9+ hour test. I don't think I even talked negatively to myself. For once, I really just enjoyed the process. There were probably 15-20 Senseis there to judge us and a full audience. I didn't want to test for that reason. Then I developed a tumor in my throat the size of a golf ball. I had trouble eating and then even trouble breathing. My doctors said I couldn't test. They were certain I had Cancer because of the fast-growing tumor. They put 16 needles in my neck for a biopsy and then lost the results. They did it all again. It was torture waiting 19 days for the results, but each day that something went wrong and held up my surgery, brought me closer to the test date. Instead of being afraid out of my mind, I was thankful for the opportunity to particpate in the test. I think that was the only time that I've been able to get the voices in my head to subside.


Tomorrow I will be back to posting cookies. I have some fun Cowboy cookies that should be done tomorrow. Today I just wanted to share some thoughts. Lets all try to clear those voices in our head. Be kinder with our words about ourselves. I'm in awe of all of you and I hope and pray that you will see what I see in you!